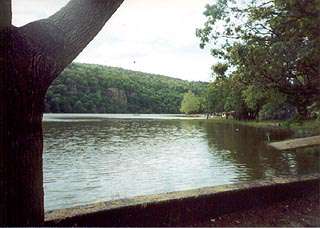 Fishing is popular in the park's three lakes - Lake Carlton, Lake Wayne Wallace, and Coon Creek Lake. Catches include largemouth bass, black and white crappie, perch, bluegill, sunfish, and catfish. The record fish is a 12 pound, five ounce largemouth bass caught in 1997. From November 1 until March 15, trout fishermen head for Fourche Mailine Creek to vie for rainbows. Oklahoma fishing licenses and trout stamps are available at the park grocery. Small boats are allowed on all three lakes, with boat ramps on Lake Carlton and Lake Wayne Wallace. During the summer season, canoes for fishing or boating, yakanoes and paddleboats can be rented.

Trails which lead through the short-leaf pine forest appeal to birders and other nature lovers. Robbers Cave is home to cardinals, chickadees, titmice, bluejays and other Oklahoma songbirds. Careful observers may catch a glimpse of the park'

There are some 5000 acres of uncleared areas at the lake for fishermen to enjoy without intrusion of skiers. Boating lanes ha...

If fishing is what brings you to the lake, then that's what most of the 400,000 plus visitors have been enjoying annually at ...