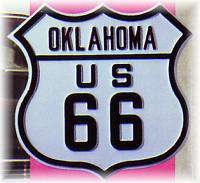 Oklahoma, the state where East meets West, stood at the heart of Route 66. For down-and-out sharecroppers, it was the road of opportunity. For travelers, it was a highway that bid America to "Get Your Kicks." From Quapaw to Texola and more than 400 miles between, the spirit of Route 66 came alive.

Through the past seven decades Route 66 has remained a reflection of America's ever-changing culture. it spawned a new breed of roadside diners, encouraged innovations in lodging and tourist attractions, and suymbolized the American ideals of high adventure and free-wheeling mobility. And it has left us a timeless reminder of our nation's heritage.

Things to do Landmarks near Elk City, OK

Steen's Buttes, mounds south of the city, were first reported by army explorers in the 1840s. The easternmost mound is "Rock ...

Red Rock Canyon became a landmark on the California Road, the pioneer trail that led westward from Ft. Smith, Arkansas to San...