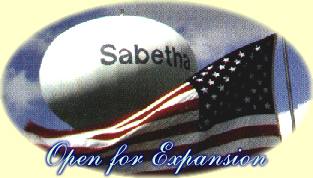 Our town has the unique distinction of being the only city with the name "Sabetha". The singular name comes from Sabetha's unique beginning.

A young prospector who was a Greek Scholar and well versed in mythical lore as well as a student of the Bible, was traveling from St. Joseph, Missouri to California. The quest for gold was the reason for the journey. He had a team of oxen--one named Hercules and the other Pelleas. His trip was cut short one Sunday when Pelleas died near the site that is now Sabetha. Unable to continue his journey, the young man pitched a tent and dug a well. He named the well "Sabaton", the Greek word for Sabbath in honor of the day. The well was exceptionally fine, and became known to other pioneers traveling westward who would stop in order to quench their thirst.

The first settlement on the land where Sabetha is currently located was made by Captain Arthur W. Williams in 1857-58. Sabetha became incorporated as a city during the summer of 1874. When Pelleas died in the 1850's, little did the prospector know what the future would hold for the final resting place of his faithful ox.

We currently do not have any events for Sabetha, Kansas in our database. If you know of events taking place, please add the event
.

Things to do near Sabetha, KS

Boating and water skiing are permitted on most of the 535 surface acre resevoir. All water vessels are required to obey signs...