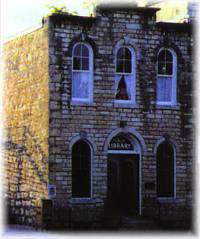 The women of the Genessee Colony of New York, who founded and settled Blue Rapids in 1870, missed the cultural advantages that had been a part of their lifestyle back east. Within a few years they had organized and became the prime instigators for a public library.

On June 27, 1874, the Ladies' Library was opened in a store. They had managed to secure 143 books from donations. Later, a lot on the east side of the Square was donated by the Town Company as a building site. The cornerstone was laid on October 20, 1875. In 1876, the library occupied the back room awaiting completion of the building. It is the oldest library west of the Mississippi in continuous operation in the same building.

In 1941, the ladies relinquished their claim to the Library, converting it to a city library supported by a small tax levy.

The Library has many things to offer other than its historical value. These include fiction and non-fiction books for adults and children, videos, audiobooks, magazines, a copier and a micro-film reader-printer to name a few. The Blue Rapids Times from 1871 through december 28, 1989 as well as The Telegraph from January 5, 1989 through Novermber 29, 1997 are on micro-film. The original papers are bound and in the Library also.

We currently do not have any events for Blue Rapids, Kansas in our database. If you know of events taking place, please add the event
.

Things to do National Register near Blue Rapids, KS