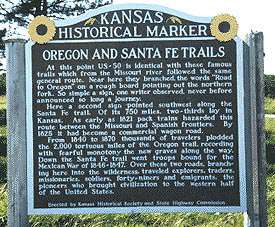 In a 1924 dedication of a State Historical Marker at the edge of Gardner, Senator Rolla W. Coleman called the place where the trails divide "the grand-daddy of all highway junctions." From its beginnings in 1857, Gardner can attribute its early growth to its unique location at the junction of the Santa Fe and Oregon Trails.

The junction of the Santa Fe Trail and the Oregon Trail is approximately 2 miles west of the town of Gardner on US Highway 56, and .25 mile to the north. At this point the Santa Fe and Oregon Trails separated after following the same route from Independence, Missouri. In the 1840s, a sign that said "Road to Oregon" was erected at this site. followed the same general route. Near here they branched, the words "Road to Oregon" on a rough board pointing out the northern fork. So simple a sign, one writer observed, never before announced so long a journey.

Here a second sign pointed southwest along the Santa Fe Trail. Of its 750 miles, two-thirds lay in Kansas. As early as 1821, pack train hazarded this route between the Missouri and Spanish frontiers. By 1825, it had become a commercial wagon road.

From 1840 to 1870, thousands of travelers plodded the 2,000 torturous miles of the Oregon Trail, recording with fearful monotony the new graves along the way. Down the Santa Fe Trail went troops bound for the Mexican War of 1846-1847. Over these two roads, branching here into the wilderness, traveled explorers, traders, missionaries, soldiers, forty-niners, and emigrants, the pioneers who brought civilization to the western half of the United States.

Come visit us in Gardner, Kansas

The Herman B. Foster house was built in the Spring of 1893. A classic example of Folk Victorian architecture, the house was the residence of one of Gardner's early storekeepers, a partner in the Bigelow-Foster Mercantile Company. In 1902

Gardner's Turner Barn is listed in the National Register of Historic Places. It was built in 1898 for W.T. Turner by Arthur J. Clinton of Spring Hill, Kansas. Clinton's trademark on the many barns he built was the "double-diamond"

The Harkey House was built in 1902 and was the former home and practice of frontier doctor, Dr. William C. Harkey. Listed on the State Register of Historic Places, the house was restored in the 1980

In a 1924 dedication of a State Historical Marker at the edge of Gardner, Senator Rolla W. Coleman called the place where the trails divide "the grand-daddy of all highway junctions." From its beginnings in 1857

Listed on the National Register of Historic Places, the Lanesfield School Historic Site is a tribute to rural schooling. It consists of a restored one-room schoolhouse, outbuildings and a visitor's center featuring an exhibit on Kansas'one-room schools called "Just Plain Simple:

To Gardner calendar of events

Things to do Landmarks near Gardner, KS