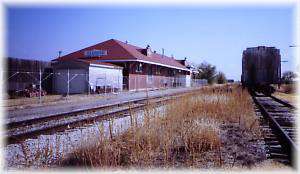 The existing Santa Fe Depot is the fourth depot built in Ellinwood and was dedicated on Dec. 17, 1903. The previous depot was hit by lightning and burned in 1902. The dedication was a most of the day affair complete with a banquet at the Dick building followed by a ball in the Mangelsdorf Building which lasted until 3 a.m. There was a presentation of "Ellinwood in 1873" followed by a response, "Ellinwood in 1902."

The depot itself was built two feet wider and ten feet longer than the other Atchison, Topeka, and Santa Fe depots of its kind. It is 145 feet 2 inches by 24 feet wide. Originally there were separate men's and a ladies' waiting rooms. The office was by the bay window. The original baggage room was 22' x24', the express room was 14' x 22', the freight room was 51' x 22', and a refrigerator room was 6' x 6'. The entire completed cost was $10,000.

The depot is now occupied by the Hines-Gossman American Legion Post 320. They have kept the exterior appearance as much as possible and inside there are three main areas. They currently have evening activities including feature menus throughout the week.

Things to do Railroad History near Ellinwood, KS