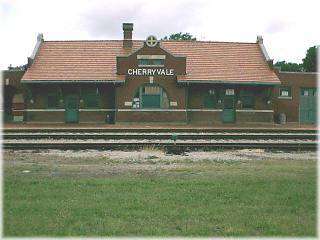 The Santa Fe Depot remains as an icon to the bygone days of railroading with memories of steam locomotives, doodlebugs and cabooses. Built in 1910, it is the only depot of this style left standing on the Atchison, Topeka and Santa Fe Railway's former Southern Kansas Lines. The waiting area beneath the old brick archway and the numerous beveled glass windows make this depot an unforgettable landmark.

It stood in a state of disrepair after the Santa Fe had no further use of the facilities. Eventually the Chamber of Commerce set up headquarters there, and a model railroad club from Parsons constructed a complete Cherryvale area model railroad display in the baggage room of this depot. The Dick Webb family, owners of the South Kansas and Oklahoma Railroad, took possession of the depot in 1992, and with a rail excursion and preservation group, restored the depot to it's original grandeur, keeping every element to it's original status in 1910. With the purchase of three climate controlled passenger cars, Webb's Heart of the Heartlands offers excursion train rides out of Cherryvale and other area towns during special celebrations.

The railroad boom in Cherryvale began in 1879 when the Frisco Railroad reached Cherryvale, crossing the already built Santa Fe. The Memphis Railroad Company extended it's road from Parsons to Cherryvale, and the Santa Fe extended it's road westward and built a branch line south to Coffeyville. The fall of 1880 saw the M.K. & T. Narrow Gauge road extended from Parsons to Cherryvale. By 1886, Cherryvale had railroads branching in many directions, and the railroad business was thriving.
Just as it did in the 1800's, the railroad continues to have a major influence in Cherryvale. The South, Kansas and Oklahoma Railroad currently uses the north-south railroad tracks through Cherryvale with several trains carrying freight and cargo through town.

Things to do Railroad History near Cherryvale, KS