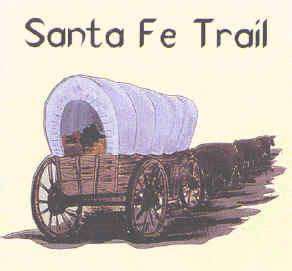 Starting near Baldwin City to the east of Osage County was a part of the Santa Fe Trail called Ridgeway, since for some 20 miles through here lies a ridge. The Trail, which followed the "route of least resistance" generally followed this natural divide to minimize the number of rivers and creeks to be forded. The first good watering spot on the prairie was Willow Springs, and from there travel was southwest toward the Hill or later called Simmon's Point - where the mocrowave now stands east of Overbrook. This was a stage stop during the later years of the Trail.

About one and one-half miles on west of Simmon's Point was a major crossing area just north of Highway 56 about 150 yards. Ruts of both the Santa Fe Trail and other trails can be seen here.

A little further west along Highway 56, a DAR marker can be found that marks where the Trail crossed to the south.

Nearly 400 yards west of the marker is a white farm house on the north side of the Highway. Across the road from the house are ruts.

About one and one-half miles east of Overbrook, the Trail runs through the old Bryson farm. Here the farmhouse faces north in the middle of the section, when the house was built, it faced north onto the Trail. About 300 yards west was a place called Rock Creek Springs #1. This was a campground and a watering stop on the Santa Fe Trail. At one time, a blacksmith shop, general store, inn and post office were located here.

From this spring, the Santa Fe Trail continued west to where the Overbrook Cemetery now is. Faint outlines of ruts can be seen going toward the school building. Near the 200 block of Ash, in Overbrook, was a spring used for a watering stop.

The Trail then ran due west through town down Santa Fe Trail Street. A DAR marker can be seen in front of the Post Office downtown. At Sycamore Street it veered to the north a bit and continued through what is now the Brookside Manor Nursing Home.


The Santa Fe Trail then turned north where the old railroad bridge is located on Highway 56 west of Overbrook. Just west of the bridge north of the highway, can be seen a windmill. The spring located here was called Flag Spring or Santa Fe Spring.

About four miles west of Overbrook was a place called Boneyard. Here a wagon train of traders was caught in a blizzard. They were trying to make it back to Westport in today's Kansas City. The men were able to walk to the safety of 110-Mile Crossing, but the oxen perished in the storm. for years, wagons going and coming on the trail used the bleached bones as a marker.

The Trail continued west through where the Santa Fe Trail High School is located and west of the school, on the Osage State Lake Road looking back east toward the school, the depression of the ruts can still be seen. From here the trail headed southwest.

Just south of Four Corners on Highway 75, another DAR marker is located. About one-half mile west of the marker was the 110-Mile Crossing. It is to named because, according to the survey of 1825, it was 110 miles from the start of the trail in Missouri.

Come visit us in Overbrook, Kansas

Osage County is abundant with magnificent old barns, including an award winning structure northwest of Overbrook. The Karnes barn was one of a group of winning entries in the Barn Again!: Celebrating An American Icon competition in 1999-2000. The huge stone structure was built in 1877

One of Overbrook's most colorful and delightful attractions is the Overbrook Quilt Connection that has been attracting quilters from far and near since 1994. Located in a modern, spacious building with 4,300 square feet of floor space and 12

To Overbrook calendar of events

Things to do Pioneer Life near Overbrook, KS