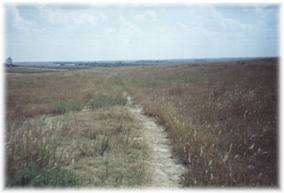 The ruts, formed by constant use from freight wagons and other heavily laden wagons, are deep swales that are still visible today. The Santa Fe Trail varied in width from a mile in some places to just a few feet in others. The westward expansion of the railroad replaced the well worn earth tracks with steel rails.

Also contained on the site are remnants of the Eureka Irrigating Canal, known also as the "Soule Ditch", which was begun in 1883 by Asa T. Soule. The canal was intended to divert water from the Arkansas River at what is now Ingalls, KS, 96 miles across gray and Ford counties, to Coon Creek in Edwards County. The canal reached Spearville in 1888, but the project failed when similar irrigation projects upstream and a prolonged drought during these years lowered the river's bed

The Kansas Highway Department has provided a turnout and parking area for easy access and visitors may walk to the site of the parallel tracks.

Things to do Landmarks near Dodge City, KS