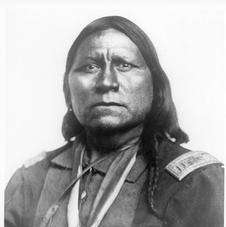 In the 1860s and 1870s, the Kiowa Indians waged an ongoing battle to protect their land and way of life from U.S. encroachment. Satanta (1830-1878), also known as Set-t'ain-te (White Bear), was a major Kiowa leader in favor of resistance. Besides his prowess as a warrior, Satanta was also a famed orator--a fact attested by his American-given nickname, "The Orator of the Plains."

Satanta had several emblems of authority. The most important were his sun shield and his lance. His most famous emblem, however, was a bugle, and sometimes he is represented in Kiowa calendar histories by the glyph for a bugle. He supposedly acquired the bugle in a fight with soldiers, in which he killed the bugler and took his instrument. Although many plains Indians had bugles, and even learned army calls to signal each other, it most often was associated with Satanta.

Satanta's position as a prominent leader among the Kiowas appears to have been established by the 1850s. He distinguished himself in battle against Pawnees, Cheyennes, and their allies, and in raids into Texas and Mexico. He also participated in a treaty council with the federal government at Fort Atkinson, Kansas, in 1853, which eased the fighting over the remainder of the decade.

He participated in raids along the Santa Fe Trail in the early 1860s, and in 1866 became the leader of the Kiowa who favored military resistance against U.S. military forces. In 1867, he spoke at the Kiowa Medicine Lodge Council, an annual ceremonial gathering, where, because of his eloquent speech, U.S. observers gave him his nickname. In his most important oration, he said, "A long time ago this land belonged to our fathers; but when I go up to the [Arkansas] river I see camps of soldiers on its banks. These soldiers cut down my timber, they kill my buffalo; and when I see that my heart feels like bursting." At the council, Satanta signed a peace treaty that obligated the Kiowa to resettle on a reservation in present-day Oklahoma.

As before, the treaty did little to end the fighting. To resolve the issue, Maj. Gen. Philip H. Sheridan led a winter campaign on the Southern Plains. On 28 November 1868, Sheridan's cavalry, commanded by Lt. Col. George Armstrong Custer , attacked a string of villages along the Washita River in southwestern Oklahoma. Although evidence almost conclusively establishes that Satanta was at the Fort Cobb Agency at the time, Sheridan and Custer accused him of murdering two white captives during the fight and interned him for several weeks to coerce more Kiowa into resettling on their assigned reservation.

For the next couple of years, Satanta participated in a number of raids in Texas where cattle ranchers and buffalo hunters were steadily pushing Kiowa and Comanche Indians onto reservations. It was one of these raids that eventually led to Satanta's capture. In May 1871, Satanta planned an ambush along the Butterfield Stage Route on the Salt Creek Prairie. After allowing a smaller medical wagon train to pass, Satanta and his warriors attacked and confiscated the contents of a larger train of ten army freight wagons. Unfortunately for Satanta, the train he had allowed to pass was carrying General William Tecumseh Sherman, the famous Civil War general, then commander of the U.S. Army. Sherman took the attack as a sign that a more militant and coordinated offense was needed to subdue the Kiowa and Comanche, who were unwilling to settle permanently onto reservations. A short time later Satanta was lured into a peace council and then arrested and was sentenced to death. Humanitarian groups and Indian leaders protested the harsh sentence. In 1873, Satanta was paroled on the condition he remain on the Kiowa Reservation.

In 1874, during the Comanche and United States conflict called the Red River War, Satanta presented himself to U.S. officials to prove that he was not taking part in the hostilities. His demonstration of loyalty was rewarded with imprisonment. Four years later, an ill Satanta was informed that he would never be released. He jumped to his death from the second story of a prison hospital.

Come visit us in Satanta, Kansas

We currently do not have any events for Satanta, Kansas in our database. If you know of events taking place, please add the event
.

Things to do Ethnic Heritage near Satanta, KS