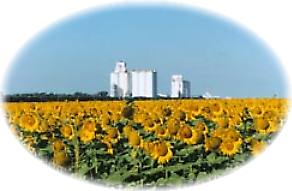 Six miles east of the Cimarron river on the level, open prairie of southwest Kansas lies the town of Satanta, so named after the warrior, Satanta, once chief of the Kiowas. Satanta (1830-1878) was a leader of the Kiowa tribe who fought an endless war to protect his tribe's land from being taken away by the U.S. government. Located on Highway 56, which has been designated a Santa Fe Trail auto route, the town was established in 1912 when the Santa Fe Railroad reached that point. Before this time, this townsite was all cattle range, known to the few who lived here at that time as, Uncle Jake Davis' pasture. This was the last town that the railroad ever chose to name after it received such criticism for selecting the name of "a ruthless Indian Chieftain."

In Satanta you will be met with friendly people who are dedicated to the community and its well-being. Still an excellent cattle feeding area, the country also contains some of the finest irrigated farmland in the state. Oil and natural gas production play a major role in the economy of the region. Just southwest of Satanta is what is known as the "longest bridge over a dry river" where U.S. Highway 56 crosses the Cimarron river, which only flows on rare occasions.

The clean, smog-free air to be found in this section of the country, coupled with a low crime rate and very few of the problems found in urban settings, makes Satanta a great place to live and raise children.

To Satanta calendar of events

Things to do near Satanta, KS