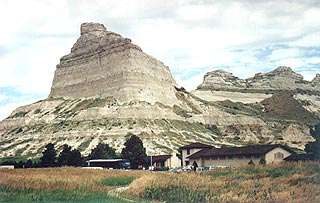 Named for fur trapper Hiram Scott, this imposing natural formation was originally called ma-a-pa-te ("hill that is hard to go around") by Indians in the region. Scotts Bluff, rising 800 ft above the surrounding valley floor, and 4649 ft. above sea level, was a famous landmark along the Oregon Trail. The bluff was once part of the ancient High Plains, but erosion over long periods has cut down the surrounding valleys to their present level. This has left Scotts Bluff and the adjoining hills as remnants of the unbroken plains which now lie further to the west.

The ghost of Hiram Scott lingers in the name of the Scotts Bluff National Monument, Scotts Bluff County , and City of Scottsbluff. Scott's story has become legendary. According to early historians, Scott, a fur trapper, became ill, was deserted by his companions, and died alone in 1828, somewhere within the shadow of the 800-foot promontory now bearing his name.

When you visit Scotts Bluff National Monument today, you drive the same road to the historic landmark that pioneers once traveled by covered wagon more than one hundred years ago. Scotts Bluff National Monument is preserved today as a national park area, dedicated to educating people on the experiences pioneers went through on the four overlying trails; the Oregon, Mormon, California, and Pony Express.

The monument consists of more than 3,000 exciting acres of history. Its preservation enables you to step on the same hopeful soil that pioneers once stood on. It allows you to identify with those who used the trails as humble roads to a new life for themselves and their children; a life that would become the heart of the growth and prosperity that has made our country what it is today.

When you arrive, you can take an adventurous hike up the 1.6 mile path to the bluff's summit, over 4.6000 feet above sea level. Or, a short, yet scenic drive up a paved road will get you to the bluff's top, where you can look to the east and see historical Chimney Rock more than 20 miles away, or to the west and see Laramie Peak from 100 miles away.

Once you come down, you can't leave without visiting the monument's visitor center, where you will find a valuable display of artistic works by William Henry Jackson, a freighter who depicts his own experiences on the trail by watercolor paintings.

And take the time to explore the land at the base of the bluff, home to hundreds of species of prairie plants, birds and mammals, as well as a rewarding geological experience in studying the unique formations of the bluffs. Also, ask park staff to point our the overlying historical trails, so you know right where the pioneers made their way through the area.

In addition, scenic trails, one of which extends 1.2 miles to the nearby Gering Pathway, offer relaxing opportunities for a leisurely afternoon of hiking of biking.

Things to do Landmarks near Gering, NE