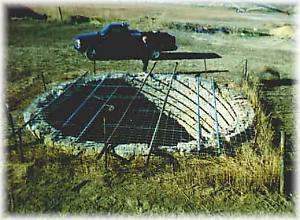 The old well is the only remnent of a once busy Santa Fe Railroad of the Great Bend Division in western Kansas. The hand-dug well has been beautifully preserved, being 110 years old. It is 24 feet in diameter and 102 feet deep, rock lined, and strange as it seems, they laid the rock from the top to bottom as they went down.

It took forty-six (46) train car-loads of stone, nine (9) car-loads of lumber for the curbing, and five (5) car-loads of cement. There were 48,000 cubic feet of dirt removed from the well. This dirt was hauled on the train cars back to Ness City to be stock piled there, as dirt was a precious commodity. It was used for laying the railroad beds, etc. Out in western Kansas at that time, the buffalo grass grew like hair on a dog?s back. It was thick and rooted down as it grew along, making it almost matted. The settlers that came to farm had to use their teams and a special implement to dig up this buffalo grass. Many of them used this sod to build their homes and other buildings on their farmsteads. The only bare ground was where the farmers had plowed.

The water from this hand-dug well had many uses. First and foremost it was used for the steam for the engines, then also to supply water for the stationary boilers, wash train cars and floors, clean out the boilers, cooling ashes, fire protection, and many similar purposes at the shops, engine house, and the station buildings. The citizens of the town of Selkirk were also furnished water at the cost only of the fuel necessary to running the apparatus, which was as liberal as could be asked.

The tools for digging this well were very simple. A wooden frame was built over the well with pulleys attached with ropes. These ropes were tied on to half - barrels and were filled with the dirt down in the well. The ropes were attached to mules, oxen or workhorses on the outside of the well, that pulled the barrels up to be emptied. After the well was finished, the pump was placed in a pumphouse above ground which transfered the water into the large tank-tower for use as needed. There was a wooden staircase that went to just above the water level.

The Santa Fe line never went on to Denver as was originally planned, nor did it go to Colorado Springs, as was later planned -- it didn?t go any farther than Selkirk. It was not economically feasible to continue since it paralleled the D.M. & A. from Scott City. It was abandoned in May of 1896, and the rails were taken up in July of 1898. The steam engine is gone, and there is no use for the railroad wells now, most of them have been filled-in years ago.

This well has been kept covered and in the ownership of the same family for about seventy (70) years. It has been donated to the Wichita County Historical Society to be preserved. Our plans are to get it on the list of The State Register, along with the National Register of Historic Places. Our first project is to erect a building over the well, and make it an site for people to view and learn about the early railroad. We would also like to display railroad memoriblila of the Santa Fe Railway. Another of the exciting plans is to build a model railroad, with steam engines along with historic buildings of each town on this particular line. We hope that eventually we can build a replica of the wooden water tower that stood at that station site.

The Selkirk Well is in the foreground with a grain elevator in behind it. The elevator is approximately 110 feet in the air,
while the well is almost as deep in the ground, at 102 feet.

We currently do not have any events for Leoti, Kansas in our database. If you know of events taking place, please add the event
.

Things to do Landmarks near Leoti, KS