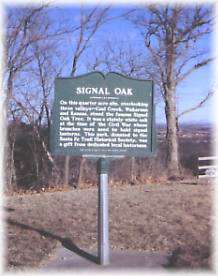 On this quarter acre site, overlooking three valleys -- Coal Creek, Wakarusa, and Kansas, stood with famous Signal Oak Tree. It was a stately white oak at the time of the Civil War, whose branches were used to hold signal lanterns. This Park, donated to the Santa Fe Trail Historical Society, was a gift from dedicated local historians.

Things to do Historical Markers near Baldwin City, KS