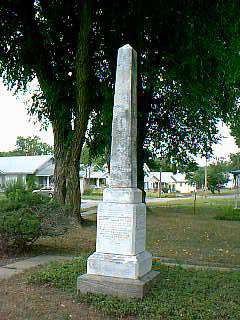 The men buried beneath the monument are Frederick Brown, George W. Partridge, David Garrison, and Theron Parker Powers. The body of Charles Kaiser was never found, but his name appears on the stone. The name of John Brown also appears on the north side of the shaft, but he is buried in North Elba, New York.

The monument was paid for by friends and relatives of those buried beneath it, and was planned and erected by "The Monument Association" which later disbanded and gave the ground and monument to the city.

Things to do Monuments near Osawatomie, KS