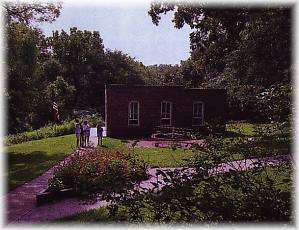 If history is your "thing," you'll find plenty to stir the imagination at the Nebraska Game and Park's Commission's Indian Cave State Park. In addition to the petroglyphs left by those mysterious inhabitants of long ago, you'll find the remnants of a mid-19th century river settlement known at St. Deroin. The first townsite in Nemaha County, the village was laid out in 1853 by a half-breed named Joseph Deroin. The original schoolhouse has been restored as authentic as possible. Considerable effort went into the research of old photographs and to studying the ruins of the structure before reconstruction was undertaken. Former teachers and students contributed greatly in efforts to locate furnishings and other items for display. running throughout the summer. Near the old log cabin, you can see such old-time crafts, such as, how to make Grannys' Lye soap and candle-dipping. The St. Deroin General Store features broom making, using an 1879 machine. The one-room schoolhouse gives a glimpse of how the Three Rs were once taught.

You can learn more about this fascinating area at the interpretive log cabin, located near the original townsite. Although rebuilt, the cabin was carefully constructed by methods used in the 1850s. Note the split wood shingles, handmade iron hardware and the fireplace built from limestone found on the park.

One of the chain of small communities that served as trading and supply posts for the river traffic, St. Deroin was a bustling town of 300 people by the turn of the century. However, it was doomed by the ever-shifting channel of the river, the subsequent flooding, and a supposed outbreak of cholera.

Education first came to St. Deroin in 1858, when a subscription school was inaugurated. That schooling served early-day residents until 1866, when A.J. Ritter, a prominent local citizen, took a hand in the establishment of a public school.

The original wooden structure was replaced in 1872 by this one-room brick structure, which was restored in 1978. Most pupils just went to the fourth grade, and school terms lasted only about three months in those early days. Parents bought all their children's books and supplies, and the books were handed down from child to child. The teachers, in turn taught from whatever books the student happened to have.

During those boisterous frontier days, teaching certificates were still in the future. Teachers were generally young men of the community who happened to have some formal education.

When the brick schoolhouse was built, the future of this river town looked bright indeed. Consequently, a large school was built. There were 61 students during its first year in 1872, and members of the Holiness Church also held regular meeting there.

The outlook changed by the turn of the century. In 1908, the Missouri River changed channels and slowly cut away the banks, destroying most of the town. Acres at a time were swept away, as the relentless river pursued its new course. Farmland and buildings simply disappeared overnight.

As the Missouri edged ever closer to the school, residents decided to move it to higher ground, salvaging what brick and lumber they could. It was relocated on the south end of the bluff, still within the old townsite, on the site of what had once been an old hotel. The reconstructed school was smaller (approximately 12 feet shorter) than the original building, and it had a flat roof. Since the townspeople were able to save seven window casings,the new building had three windows on each side and one between the doors.

The salvaged school served 30 students for six months, but the town of St. Deroin was doomed. When the store and a residence were moved to the high bluff ground near the school, it marked the end of the town's use as a Missouri River portage.

Education continued, however. From 1909 to 1944, Nemaha County operated the school as District 56, and the structure also served local families as a church, community house, and polling place. It still stands as a symbol of the importance of education to early-day Nebraskans.


Come visit us in Shubert, Nebraska

Nestled on the banks of the Missouri River on Nebraska'

If history is your "thing," you'll find plenty to stir the imagination at the Nebraska Game and Park's Commission's Indian Cave State Park. In addition to the petroglyphs left by those mysterious inhabitants of long ago, you'll find the remnants of a mid-19

Overlooking the Missouri River on a high Nebraska bluff is the abandoned pioneer cemetery with markers dating from the mid-1800's. There are several Civil War Veteran markers from both the northern and southern states, along with notable Hall Family markers, and the town'

To Shubert calendar of events

Things to do Historic Schoolhouses near Shubert, NE