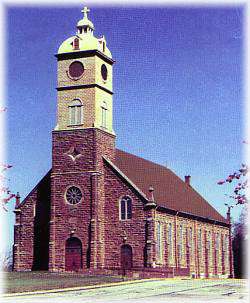 In 1847, the Mother Church of the Diocese of Wichita was set up in one of the government-built log structures at the Catholic Osage Mission. The missionaries dedicated the church to the patronage of St. Francis Hieronymo, a Jesuit, who had been canonized by the Church as a saint on May 10, 1839. As soon as 1848, the log church proved to be too small, and from then to again in 1861, and again in1871, additions were added to accommodate the growth of the mission community.

In the spring of 1872, the foundation for the new and present 75 x 100 foot stone church structure was laid just a few yards east of the original church. On June 23, 1872, Bishop L.M. Fink laid the cornerstone. A bell weighing 3,000 pounds, measuring 46.5 inches in diameter was put into position in the bell tower. The bell is inscribed with a dedication in the memory of Father Schoemakers, founder of the Mission and St. Francis Parish.

Twelve years after the foundation was laid, this stone structure of St. Francis Hieronymo Church was dedicated on May 11, 1884.


St. Francis Church is Romanesque Revival - a style of European architecture of the 11th-12th centuries, characterized by the use of the round arch and vault, thick, massive walls and interior bays marked off by pillars. Characteristics of this architecture is also carried out in much of the interior furnishings.

St. Paul of the Cross's statue rests in the east altar-shrine. St. Paul (1694-1775) was born in Italy. A soldier before becoming a priest in 1727, he founded the Congregation of the Passion (C.P.), better known as Passionists. Besides the three vows of poverty, chastity and obedience, Passionists make a fourth vow "devotion to the passion of Christ." Their chief ministry is preaching retreats. The badge they wear on their "religious habits" or garb consists of a heart with three nails in memory of the sufferings of Jesus. Paul was canonized in 1920 and his feast is now celebrated on February 27. Passionist Priests served St. Francis parish from 1894-1987. Many Passionists have made their profession of vows and were ordained in this church.

The stained glass windows were purchased from J.J. Wagner of Kansas City Stained Glass Works in 1900. These were releaded and repaired in the 1970s renovation. There are two rose windows in the front of the church - circular windows embellished with tracery that is symmetrical around the center.

Things to do Historic Churches near St. Paul, KS

This historic church building was built in 1887 after the previous church had been destroyed by a tornado. ...