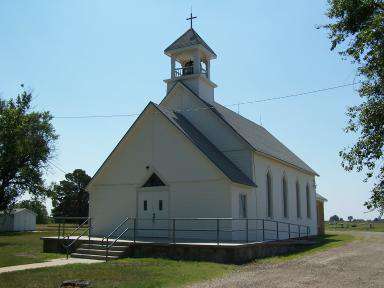 Through the faith, love and caring of our Parish families, we will continue on at our small parish of St. Isidore's Cathoic Church.

In 1870, ten Catholic families formed the nucleus of St. Isidore Parish. A French priest, Fr. Mollier, stationed at St. Joseph, KS, made the journey with his team of horses to offer Mass for these people in the home of Mr. Owen McDonald. Mr. McDonald donated 10 acres of his land on which the present church stands.

The first church was built in 1873. This original church, which is the current sanctuary and sacristy, was built of rock that was hauled from a farm one mile north and one mile west of the present-day Cuba. The cornerstone on the 14 feet by 24 feet structure is dated 1873 and lists the pastor and church committeement names. In 1883 the church was enlarged with a white frame addition of 24 feet by 40 feet. This addition was paid in full with the cost of $747.37!

The rectory was built in 1893 and located about 15 yards east of the present church near the old pump that is still visible today. In that year, three parishes shared the expenses of the rectory that was bulit in Cuba. On April 9, 1907, the metal crucifix which dominates the cemetery today was donated and erected. In 1908 the sidewalk and steps were constructed replacing a plank walk.

During the winter of 1929, a fire in the rock part of the church did considerable damage to the interior. The roof on the rock part caved in. Later this part was rebuilt and redecorated.

In 1945, St. Isidore began the first bazaar serving 500 to 600 people with chicken and ham dinners, also having carnival games and a free Polka dance. The bazaar continued on until changing to a soup supper in 1979 and since 1992 the Annual Turkey Supper, Bake Sale and Silent have been held.

Modernization came to the church structure in 1947 replacing the coal-burining pot bellied stove to a gas furnace, and electricity replacing the kerosene gas lamps. Wood paneling was installed in the sanctuary along with a new ceiling and a general paint job. The main altar was changed from Gothic style to Romanesque. A large wooden crucifix was placed above the altar. Also during theset imes, in 1958, a new electric organ was purchased and in 1966 the organ was moved from the choir loft to the front of the church.

In 1965, a new blonde table altar was installed so the priest would now face the congretation. In 1966 the church steeple was rebuilt and also stained windows were installed. The congregation painted the exterior of the church in 1967. Once again, in 1968, St. Isidore was a mission of St. Joseph.

In the fall of 1968, an annex was built on the front entrance of the church. This included the first indoor restroom and a small classroom/entrance room. In 1970, the interior of the church was redecorated. The men of the parish refurnished the church with the ladies providing lunches. Then in 1978 carpet was installed in the entire church and in 1979 masonite siding and shingles were put on an dnew cabinets were built in the bathroom.

New oak main altar and side altars were constructed and donated in 1981. Ceiling fans were installed in 1983 and the church was painted again in 1986 in which a new furnace was also purchased. Also a new storage building was added in 1989.

The Altar Society was established in 1889 with the first dues being a dime a month. The altar society has kept active through the years. On April 18, 1989, the St. Isidore Altar Society celebrated their 100th Anniversary with a salad supper, program and entertainment. Invited guests were women from the neiboring churches.

In 1990, air conditioning was installed and the front doors were replaced. The doors were donated as a gift to the church. In 1994, a new speaker system was installed for the first time. When August 1997 came, new vinyl siding was being put on the church and also a new planter box, which was made and donated, beautifies the cemetery entrance.

St. Isidore Parish celebrated their 125 years on Sept. 13, 1998. The outdoor mass was held in the church grove. Those invited were the bishop, priests and other religions. The afternoon consisted of a potluck dinner and entertainment. A 3-oz. mug was sold as a souvenir in rememberance of the 125 years.

In 1999 St. Isidore purchased a new electronic piano thanks to a donation given. Also, in 1999, St. Isidore gained a new oak advent wreath and repair to the church bell were both through donations. In 2001 an iron trellis was donated as a memorial which adds to the flower box.

St. Isidore is full of history and has had a roster of 41 priests from 1870 until Fr. Ralph Aschenbrenner in 2001.

The following are a list of Priests at the St. Isidore's Catholic Church:

Come visit us in Cuba, Kansas

Things to do Historic Churches near Cuba, KS

Hopewell Church was originally located southwest of Beloit. Parts of the church building are 111 years old. Founded in 1876 a...