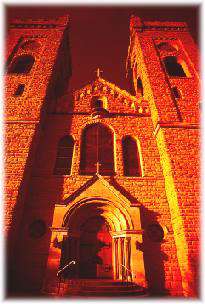 Visitors are amazed to find such "Old World" architecture and art in the heart of Kansas.

There are 29 colored windows in the entire church. Those above the central entrance and in the lower portion of the larger windows are stained glass. The others are of a special process of painting.

There are fresco paintings, a form of painting applied directly to wet plaster rather than to canvas, in this beautiful church. The stations of the cross are cast in plaster in a type of raised figure known as "bas-relief".

The large white Carrara marble altar with brown Aftican marble trim was installed in 1906. The mass altar, side altars, lecterns and communion stations are also of imported Carrara marble.

Placed on the National Register of Historic Places on April 14, 1975.

Things to do Historic Churches near Beloit, KS