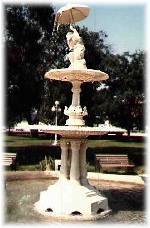 John Pierce St. John was the governor of Kansas at the time of the Mormon settlement in 1879, in what was then named Zion Valley. St. John became the permanent county seat in 1882 and for that status the town offered to the county the public square, 40 acres for a fair ground, offices and courtrooms free of cost for five years.

The square in the center of town acquired the name of "St. John's mud and weed patch" because of the unsightly weeds and the occasional mud in the buffalo wallows. Bickerton's Zion Valley Post Office was moved to the square and the name changed to St. John. From turnip patch to city, the lease obligated the county to cultivate the square, plant trees, and erect a fountain and fences.

A reviewer familiar with the part played by Bickertonites in settling the St. John community, says, "There has been from the beginning of Stafford County, a sense that this is a protected area, that God directed the early settlement. The area was designated as a State of Zion, first called Zion Valley by the inspiration of God. It carried with it a blessing from heaven.

Brown Park is complete with playground equipment, a swimming pool, tennis and

We currently do not have any events for St. John, Kansas in our database. If you know of events taking place, please add the event
.

Things to do near St. John, KS