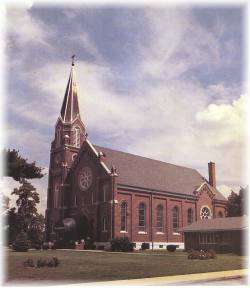 Up to 1883 all Catholics in the area belonged to St. Patrick's Church which was organized in 1871. But owing to the increased immigration of the Germans and Poles, some of these members requested Bishop Hogan for a parish of their own. The first St. Mary's church committee was elected in September of 1883, and empowered to negotiate a deal with the Baptist congregation to purchase a tract of land just south of the Frisco railroad tracks in the Clear Creek Addition. The first parochial school classes were held in 1885 and 1886 in a farmhouse located about seven miles south of town until a building was built in 1889 and taught by Sisters Eulalia and Benedicta of the Sisters of the Most Precious Blood from O'Fallon.

During the time when the parishioners of St. Patrick's were completing building plans, fire destroyed St. Mary's Church in 1892. It was replaced by a frame Church on the same location. It was also at about this same time that the increasing number of Polish families of the congregation desired a church of their own which they built in 1892 in Pulaskifield.

In 1910, Father Sisbert Burkhand, O.S.B. became pastor of St. Mary's and during his pastorate the present spacious brick Church was erected. The Romanesque style St. Mary's Catholic Church was dedicated in 1913.

The flood waters of 1941 seriously damaged the church basement, convent, and rectory but a successful fund drive allowed for repair work fixing the basement, improving the heating system, the roof was repaired, new light fixtures were installed, the interior was painted and decorated and the cross on the steeple was gold-leafed.

Again in 1975 when interior renovations were being made, the statue of the Pieta, which was long thought to be of plaster, was unveiled as an age-old wood carving. The carving, which is believed to have been brought to St. Mary's in 1892 by Father Thomas, was uncovered by the art instructor who had been hired to paint the statue.

St. Mary's Old Fashioned Picnic was started as a fund raiser in June of 1987 and continues as a successful event with all parishioners taking part on the first Sunday in June.

St. Mary's Church and School were damaged by a tornado on May 4, 2003. Some repairs allowed the buildings to remain or return to regular use. Restoration and repairs were completed.