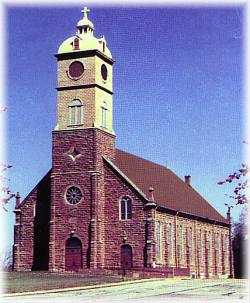 In most parts of the world, churches and schools are established only after the localities are established. In new countries they follow colonization. A group of people are no sooner settled in a community than they look to the establishment of churches and schools. This has been mostly true of Neosho county, but not so of Osage Mission. the church and school were there first, and they formed the magnet that drew large numbers of the early settlers to locate near them. That is why Osage Mission in the early days was the largest town not only in Neosho county, but in the district. The descendants of many of these early settlers still live on or near of the old homesteads. The magnet being Catholic, is why Catholics predominate in the locality. The church and school that drew them still are quite active.

Father John Schoemakers, S.J. founded Osage Mission on April 28, 1847. Called the "Apostle to the Osage" and the "Father of civilization in southeast Kansas," he served for 36 years as spiritual director, doctor, steward, lawyer, judged, catechist and preacher to the Osage. He served as an officially appointed U.S. postmaster of Osage Mission from 1851 to 1864. With the relocation of the Osage he ministered to the needs of the newly arrived settlers. He built the present St. Francis stone structure. Father Schoemakers is buried in St. Francis Cemetery one quarter mile east of the Church.

As early as 1883 there was agitation to change the name of Osage Mission because it suggested it was still an Indian Mission. Neona was suggested to honor the daughter of Chief Little Bear, but local protests favored the name of St. Paul. The reigning judge decided to allow the citizens to vote on the new name and St. Paul was chosen in an election on July 1, 1895. Some claim the new name was selected to honor Father Paul, the great missionary, but it was most probably selected in honor of St. Paul of the Cross, founder of the Passionist Order which had just then established a home in Osage Mission.

The historic St. Francis Hieronymo Church dedicated in 1884 has undergone is latest renovations in 2000 and stands majesticly across the highway of the recently opened Osage Mission-Neosho County Museum. The Lone Elm school begun in 1867 stands on the museum grounds.

Also at St. Paul, a visit to the St. Francis Parish Cemetery reflects much of the history of the Osage Mission, as does the only remaining structure of St. Ann's Academy started by Mother Bridget Hayden when she arrived at the Mission in 1847. The Infirmary and guest house has now been converted to a bed and breakfast, but strives to maintain its history and authentic design.

Things to do near St. Paul, KS

Kiwanis Park Playground tables, grill and rest room are adjacent to soccer fields. Located at the east edge of B...