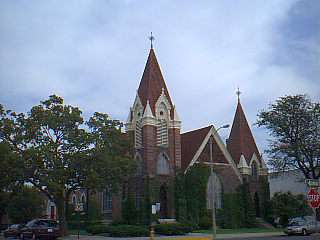 This landmark English Gothic structure opened for worship on July 7, 1889. The church was constructed with red granite from Colorado and trimmed in gray sandstone from Wyoming. The stained glass windows were imported from Europe. In 1903, President Theodore Roosevelt was seated in the third-row pew as he worshipped with the local congregation after a tour of the western states. President Roosevelt also broke ground for the new Carnegie Public Library.