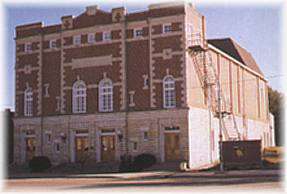 The historic Brown Grand Theatre is located at the west end of downtown Concordia. Listed on the National Historic Register, the French Renaissance theater was built by Col. Napoleon Bonaparte Brown in 1906-07. The 650 seat theater has two balconies, eight box seats, and features a grand drape, which is a reproduction of a Horace Vemet painting titled, "Napoleon at Austerlistz." The original Napoleon curtain was a gift from Earl Brown to his father on opening night, September 17, 1907. Damaged by water stains during a tornado in 1967, a new curtain was painted by the same company that painted the original 1907 curtain. Other historic features include old play bills and lead glass windows.

The Brown Grand operated as a legitimate theater for 50 years. In 1974, it underwent $500,000 of renovation and in 1980, on September 17, it reopened with its original 1907 play, "The Vanderbilt Cup," attended by three ladies who also attended the original performance.

Known as the beacon light of Concordia, the well-known rose window looks over the community from the convent. It is the official Motherhouse and Home for the 260 Sisters of St. Joseph of Concordia. It was built in 1903 and is listed in the National Register of Historic Sites

The Museum preserves and exhibits objects and documents of historical items representing early-day Kansas. It is housed in the former 1908

Big Brick, Big Wall, Big WOW! "How did they do that?" "I've never noticed this before!" What was once a nondescript wall that vehicles whizzed by on their way through Concordia on US 81

Things to do Historic Theatres near Concordia, KS