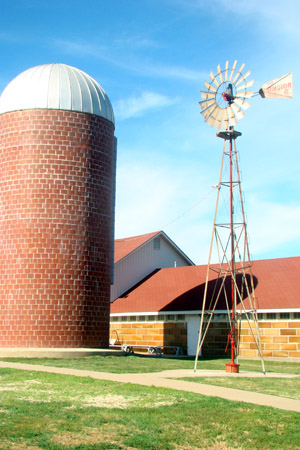 The Fairchild/Knox hay barn and milk parlor are now the Community building and the museum of the Tonganoxie Historical Socitey. The original barn was built in 1901, but burned down in 1928.

Frank Fairchild, with his wife, Mattie, formerly of Ulster County, NY started the dairy with 40 acres and 15 milk cows in 1884. Working with Kansas State University he built what became the dairy center of Kansas with himself as top dairy man in Kansas. Frank Fairchild, Mattie and their 6-year-old granddaughter, Thelma, were tragically killed in a car-train accident in 1917.

The farm passed to their only child, Bessie Fairchild Knox and her husband, Archie. The second barn, built in 1929, still stands at its original site. Part of the original rock foundation supports the barn. Bessie and Archie Knox passed the farm to their daughter, Mildred, who with her husband, Arthur Young, raised white faced cattle on the land until 1976. Mildred Knox Young donated the barns and 6.3 acres of land to the Society in 1987.

The hay barn has been renovated with a kitchen and restrooms. It may be rented for birthday parties, weddings receptions, family reunions and other celebrations.

The milk parlor has been renovated into the Museum and is featured on this web site.


Come visit us in Tonganoxie, Kansas

The original Reno Methodist Church was opened August 16, 1891 at a cost of $1,900. Samuel Kelsall and James Phenicie were instrumental in its organization. The first minister was John Jacobs - a Baptist and blacksmith in Reno. The original building was destroyed by fire in 1918

As one of four buildings on the Tonganoxie Historical Society site, the Honey Valley schoolhouse – district #56 - was organized on March 25, 1869. It was located about a mile south of Tonganoxie on the Gordon Harmon Farm -near County Road 1 and U. S. Highway 24-40

To Tonganoxie calendar of events

Things to do Historic Barns near Tonganoxie, KS