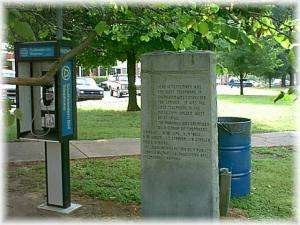 This monument was erected as a public service by the Southwestern Bell Telephone Company.

Adjacent to this marker is another marker reading -

- The first man to speak on the telephone west of the Mississippi from Fort Gibson to Tahlequah.

Things to do Markers near Tahlequah, OK