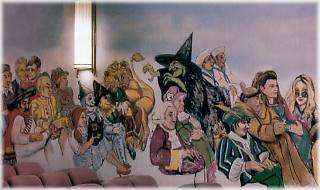 Winner of a Governor's Award of Excellence, The Flag is home to the Family/Children's Theatre, Kansas' only festival stage complex - a dynamic, flexible and acoustically superior space, seating 315. The Family/Children's Theatre presents six main stage shows each year. The theatre also has monthly melodramas and open talent competitions. The mural painted along one wall of the auditorium depicts both real and unreal likenesses of a packed audience.

The Flag also serves central Kansas as a small meeting facility as well as a performance venue. The Flag hosts a wide diversity of activities such as town meetings, teacher conferences, business meetings, spelling bees, bodybuilding competitions and fashion shows. Conveniently located in downtown Hutchinson, the Flag is available to rent.

Things to do Theatres near Hutchinson, KS

The Ritz Theater on Main Street has been preserved and is used for occasional performances. Plans are underway for regular pe...

Built in 1936, the theatre has its original wooden seats and original advertising canvas. A Spring and fall film series is sh...

The Star-Vue Drive-In Theater is one of Kansas' few remaining outdoor big screens. ...