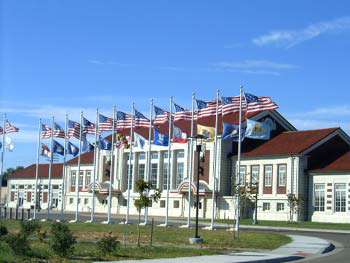 This historic Union Pacific depot has been restored to its 1927 grandeur as The Great Overland Station. Located along the Oregon trail, the Station tells the story of Topeka and its railroad heritage. The All Veterans Memorial, Corridor of Fifty Flags, and BNSF Railway Plaza is a signature landmark for Topeka.

Designed by renowned architect Gilbert Stanley Underwood, the beautiful Union Pacific passenger station was reported to be "one of the finest passenger stations on the line" when it opened January 27, 1927. With its 34-foot ceiling and ornate glazed terra cotta ornamentation, the elegant building is perhaps the finest representation of classic railroad architecture in Kansas.

The station was built on a site already rich in history. Here, the Pappan brothers ferried Oregon Trail pioneers across the Kaw River, while Indian Chief Burnett traded supplies and horses with the sojourners. Slaves seeking their freedom crossed here on their way north along the "underground railroad." Future Vice President Charles Curtis, grandson of Louis Pappan, was born on a corner of the property. George Armstrong Custer, Buffalo Bill and Wild Bill Hickok were frequent visitors to the bustling frontier community on the north bank of the river. The area from the river front through the North Topeka business district contains historic buildings, largely original and intact. The early history of our community survives in North Topeka, waiting to be brought to life.

The last passenger train left the station May 2, 1971. The building was later remodeled for railroad offices, abandoned in 1988, and damaged by fire in 1992. At that point, Railroad Heritage, Inc. secured a lease from the Union Pacific Railroad to prevent the building's demolition. A Use and Feasibility Study indicated that a museum celebrating railroad heritage was the most desirable use for the station. The Great Overland Station Project Team was established to direct efforts to preserve the station and transform it into a railroad heritage museum. In June 2004, The Great Overland Station opened its doors again as a community landmark.

The Heartland Orthodox Christian Museum presents the art, history and traditions of the diverse Orthodox communities in America. Discover the region'

Things to do Railroad History near Topeka, KS