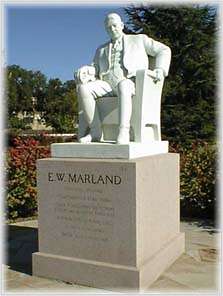 Marland's favorite sculptor was Jo Davidson. He designed one of the models for the Pioneer Woman. He also sculpted the three Marland family statues, all of French limestone. Prior to the sale of the mansion, they all stood on the estate grounds. When the monks bought the property, they wanted only religious symbols on the grounds, so all three of the statues were removed and put in crates.

In 1951, Mr. Marland's statue was placed downtown on the lawn of the Civic Center, a gift to the city from Lydie. The statue of George was placed in the backyard of a close friend, and covered with straw. When the city purchased the mansion, George's statue was returned to its original location, in the circle of the hedges near the mansion's front door. It has now been placed inside.

The statue of Lydie originally stood on the north vista. It was visible from the breakfast room doors. When the monks removed the statue, it stayed in the crate next to Lydie's cottage for several years. In the early 1950's, when she was preparing to leave town, she paid a man to take it away and destroy it. She died thinking he had followed those instructions. After her death in 1987, and after the death of the man she had paid to destroy the statue, the mansion received a letter from one of his family members. It said the man had not destroyed the statue. He hadn't been able to bring himself to do that, so he buried it. After a long search, it was located. It was in 760 pieces, but was put back together and restored by a local monument company. Lydie's statue now stands in the lobby of the mansion.

The Land of Hope Statue and Kay County War Memorial are located on the Courthouse Lawn. ...