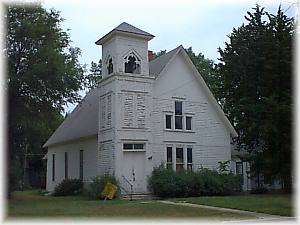 [The Methodist Church] The Methodist Church building described in My Antonia , now serves as a Masonic Lodge. Cather tells how, during the winter, the children were starved for color and how they stood in the cold and looked at the stained glass windows:

"When I got as far as the Methodist Church, I was about halfway home. I can remember how glad I was when there happened to be a light in the church, and the painted glass window shone out at us as we came along the frozen street. In the winter bleakness a hunger for color came over people, like the Laplander's craving for fats and sugar. Without knowing why, we used to linger on the sidewalk outside the church when the lamps were lighted early for choir practice or prayer-meeting, shivering and talking until our feet were like lumps of ice. The crude reds and greens and blues of that colored glass held us there."