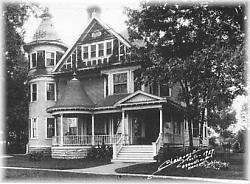 William M. Mills, an oilman from Pennsylvania, drilled over 400 oil and gas wells in his lifetime. He drilled the Norman #1 well in Neodesha, Kansas which was the first successful commercial oil well west of the Mississippi and opened up the Mid-continent oil field. His companies supplied gas to the town of Osawatomie, Paola, and Spring Hill. In 1902, he used profits from these ventures to build the magnificent home on First Street.

The Queen Anne style house was designed by the famous architect, George Barber and cost $49,000 to build. It has over 7,000 square feet, 9 fireplaces, elaborate woodwork and ornamental ceilings. During the mid 1900s the house was converted to apartments and allowed to deteriorate, but is now being restored to its original beauty by State Senator Doug Walker and his family. The home is listed on the National Register Of Historic Places.

Things to do Historic Homes near Osawatomie, KS