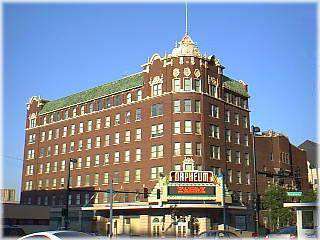 The Orpheum Theatre in Wichita, Kansas represents one of the finest remaining examples of atmospheric school of theatre architecture which was developed during the first part of the 1900's. There were two major schools of design: the standard school derived its form and decoration from nineteenth century opera houses and the vaudeville theatre traditions. The atmospheric school concentrated on creating interiors that could provide the patron with the feeling he inhabited a landscape setting. Opening on September 4, 1922, it was the first atmospheric theatre in the United States. The Majestic in Houston, Texas was the second.

Architect for the Orpheum, John Eberson, creator of the atmospheric school, conceived the Orpheum as a garden of old Andalusia. It's entire design was that of a Spanish garden or court "made festive by music and torchlight". The Orpheum had a fully developed decorative theme and the sky and star projections properly associated with the atmospheric theatre. The magnificent proscenium arch is the main feature of the auditorium which originally contained 1,700 seats. The sidewalls of the auditorium were accented by niches with mock tile roofs and grills and wooden lattice work arches across the ceiling to create a courtyard effect. The theme of a Spanish courtyard was continued in the decoration of the balcony. The stairways to the mezzanine are ornamented with the original plaster moldings and arched doorways. On the stage in the flyout hangs the theatre's original fire curtain. It is a hand executed painting on asbestos, designed specifically for the Orpheum by John Eberson and rendered by Fabric Studio of Chicago. This curtain is quite valuable in its own right.

At the time the Orpheum was built, modern sound enhancements were not available and the architects of the period had to be skilled acoustical engineers. John Eberson was one of the best and, to this day, the quality of sound within the auditorium, with or without amplification, is exceptional.

In 1982, the Orpheum was designated a National Landmark and placed on the National Register of Historic Places. It is now owned and operated by the Orpheum Performing Arts Centre, Ltd., a non profit corporation which is dedicated to the preservation, restoration and ongoing utilization of this important part of our cultural and architectural heritage. See the Centres website for production schedules and feature information.

Historic Engine House No. 6 - The year is 1910. Imagine a pair of matched fire horses, Tom and Dick, in their stalls, one on each side of the apparatus floor, awaiting their next run. The Armstrong harnesses are hanging from the ceiling in readiness. (The pulleys are still there.)

The Wichita Art Museum (WAM), showcasing American art, is the largest art museum in the state of Kansas. Nationally renowned for its outstanding collection of American art, the WAM is home to three centuries of American masterpieces and more than 7,000

Things to do Theatres near Wichita, KS