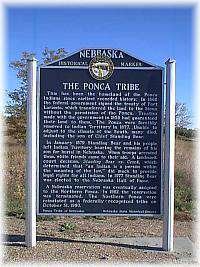 This has been the homeland of the Ponca Indians since earliest recorded history. In 1866, the Federal government signed the treaty of Fort Laramie, which transferred the land to the Sioux without the permission of the Ponca. Treaties made with the government in 1856 had guaranteed their land to them. The Ponca were forcibly removed to Indian Territory in 1877. Unable to adjust to the climate of the South, many died, including the son of Chief Standing Bear.

In January 1879, Standing Bear and his people left Indian Territory bearing the remains of his son for burial in Nebraska. When troops arrested them, white friends came to their aid. A landmark court decision, Standing Bear vs. Crook, which determined that " an Indian is a person within the meaning of the law," did much to provide legal rights for all Indians. In 1977, Standing Bear was elected to the Nebraska Hall of Fame.