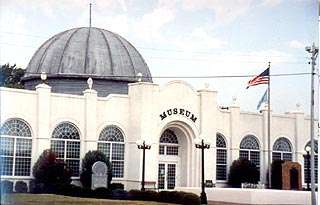 The history of this city and the surrounding area is artfully preserved in the Top of Oklahoma Museum displaying a full historical reference to life in northern Oklahoma from the earliest Indian occupation to the current day. Housed in the historic Electric Park Pavilion, the exhibits cover the home and family life, reflecting a step back in time to the turn of the century. Touches of lace and linens, china or crystal show treasures brought by the strong hardy stock who braved the stages of struggle in developing a new land.

Blackwell boasted many churches and church artifacts are well documented visually. The cultural importance of music is reflected in a hand-carved piano. Clothing exhibits represent the earlier day fashions whether lace-trimmed dresses or sailor suits with knickers. The handmade petticoats on display may have swished under long dresses at local barn dances.

The primitive loom created cherished rugs, tapestries and coverlets, some of which are displayed in the museum.

Crazy-patch quilts of left-over scraps of fabric from garments made for family members stir up memories of the past as the frugal homemakers created tiny stitches to join them in a quilt. Then each piece was decorated with silk thread embroidery (feather stitching).

Many sewing machines evidence the thrifty homemakers that clothed their families in outer or under garments, in contrast to factory produced clothing today. The antique toys and children's books of yesteryear delight the youngsters of today and bring back memories to adults of their childhood.

A major industrial display features photographs and a variety of glass bottles, jars, etc.from the Hazel-Atlas Glass Factory which was destroyed by a deadly tornado in 1955.

A fine collection of photographs depicts the "oil boom" in Oklahoma towns near Blackwell. These boom towns sprung up whenever there was a new field of "gushers."

A saddle, which carried a Pony Express rider delivering the mail across the fertile plains, represents the early method of communication. The stately oak post office installation, removed from the Federal Building during an early renovation, has been reconstructed to show Blackwell's progressive development in the delivery of mail.

The sod-buster plow began the transformation of the land into some of the most productive wheat land in the United States. Native American cultures enrich the history of Kay County. It was originally a part of the Cherokee Outlet, which comprised over six million acres given the Cherokee Indians by treaty as hunting grounds. On permanent display at the Top of Oklahoma Museum are many photographs of Native Americans, made by the noted frontier photographer, W.S. Prettyman, who had homesteaded near Blackwell and maintained a photo studio there.

Also on permanent display are the contemporary art renderings of a Cherokee artist. Art exhibits of local Native Americans and traveling or temporary exhibits significant to the area are encouraged.


Come visit us in Blackwell, Oklahoma

Things to do Museums near Blackwell, OK

The A.D. Buck Museum of Science and History was founded in 1913 by Mr. C. E. Johnson who was a biology instructor. One of his...