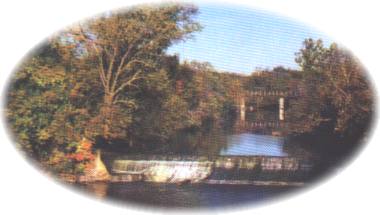 shouted one of the small bands of hardy pioneers who in August of 1857 discovered a spring of cool , clear water not far from what is now known as Fall River.Abundant drinking water was a strong factor in their search for a place to settle; therefor, they soon agreed that they had found an ideal place and laid claim to the area for a town site they chose to name Eureka!

Makeshift cabins and shanties became temporary homes and Fort Montgomery was built as a defense against Indians, but they offered no problems. In 1872, Eureka was chosen to be the Greenwood County seat and a courthouse was built.

Most of the earliest pioneers sought and found fertile land along the rivers and streams. Later, settlers had to be satisfied with the hill land which was covered with native grass. Ironically, that grass proved to be among the most nutritious in the world. Cattle ranching soon became a powerful force, and Eureka became it's hub. Two railroads were built thru the town. The elegant Greenwood Hotel was completed in 1884, and became the rendezvous of the local ranch owners, the Texan cattle owners, and the Kansas City buyers.

Oil was discovered in the county in 1917 and for many years it brought prosperity to Eureka and the county. Eighty years later, oil is still an important source of revenue for the area.

Today, Eureka has all the elements which make a town a pleasant place to live; excellent schools, churches, health services, restaurants, and lodging for tourists. Eureka Downs, our local horse-racing track, is but one of a variety of recreational facilities which are in place for the enjoyment of the public.

Things to do near Eureka, KS