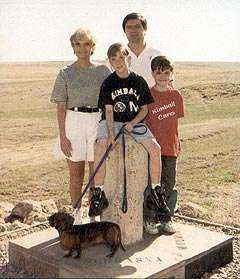 The original marker designating the southwestern corner of nebraska and the southeastern corner of Wyoming where they meet the Colorado line was erected on august 17, 1869 by Oliver N. Chafee. The marker had only "Colorado" (then a territory) on it and the longitude was measured from the Naval Observatory in Washington, D.C. (27 degrees West L

A new base was built around it in 1981 by art Henrickson of Kimball. The state names were put on the new base with a different colored stone used for each state. The correct latitude and longitude were also added. Even though the original marker is several hundred feet from where Congress had intended it to be, the location is the official corner for the states.

Phone: 308-235-3782
Drive 12 miles south of Pine Bluffs, WY, on the county road. At the end of the oiled road, go across a cattle guard on the left side, along a pasture trail past a windmill, about 3/4 mile east to the three-state corner marker. It will be easy to see.

Things to do Landmarks near Kimball, NE