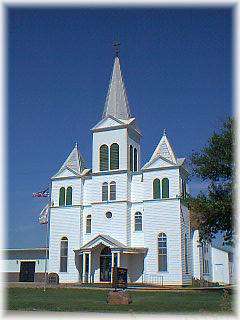 
In 1885, according to a book written by Kern, there were approximately seventy inhabitants in Friedensau and the surrounding area. There were two German Lutheran churches, a school, post office, a water-powered grist mill, lumber yard, hotel, livery stable, blacksmith shop, and a number of other small businesses.

As late as the fall of 1886, it was expected that the Rock Island Railroad would be extended from Fairbury through Hebron, Friedensau, Kiowa, Oak, and Nelson. However, due to the influence of area landowner, John C. Deshler, the railroad was routed east through his property. After the railroad reached Deshler in 1887, the buildings in Friedensau were moved over the fenceless prairie and relocated in Deshler. Only the Trinity Lutheran Church and its cemetery remain in the Friedensau area today.

Things to do Historic Churches near Deshler, NE