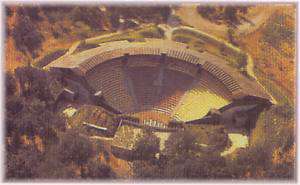 Also located on the grounds of the Cherokee Heritage Center is the Tsa-La-Gi Theater, a 1,200 seat outdoor amphitheater, nestled on a hillside where special programs are held, including the Trail of Tears drama, a must see evening of intense drama, pageantry, and dance, wherein unfolds the bittersweet story of the Cherokee, torn from his ancestral home in the Eastern highlands and forced to begin life anew in the strange and foreboding wilderness that would one day become the state of Oklahoma.


Address: 3 miles south of Tahlequah on US Highway 62
Phone: 888-999-6007
Our Email: info@cherokeeheritage.org
Our Website:www.CherokeeHeritage.org

Things to do Theatres near Tahlequah, OK