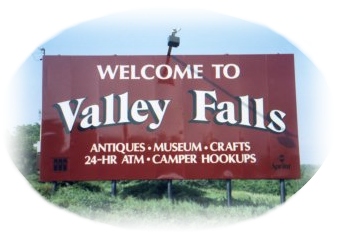 May we Welcome you to the City of Valley Falls, Kansas!

Valley Falls is situated on the Delaware River at the headwaters of the Perry Reservoir. We are served by State Highways, K-4 and K-16.

Valley Falls is a pleasant community of fine homes and tree-lined streets. It has modern utilities, as well as the finest schools and churches, an extensive area of parkland, and a swimming pool for recreational use. Fishing on the Delaware River brings fishermen from afar. The river also allows easy access to the Pery Reservoir by a pleasant trip of approximately 5 miles along the course of the Delaware River to the reservoir.

There are approximately 60 businesses in Valley Falls offering goods and services to the residents and visiting public. Walk the brick streets of downtown and shop for antiques. Or enjoy lunch at the local eateries! Enjoy an afternoon at our lovely city park complete with shelters and camping facilities.

Valley Falls history began in February of 1854 when Henry Zen located near the falls of the Grasshopper River. The first permanent settlement was staked out on Christmas Day of 1854 by James Frazier, Robert Riddle, Hozea B. Jolley, and Andrew J. Whitney. In the spring of 1855, a survey made by Isaac Cody, father of "Buffalo Bill" laid out the town of Grasshopper Falls. One hundred maps of the town were lithographed and sent east to advertise the town.

The falls, located where the old Santa Fe Railroad bridge now crosses the Delaware River, became the site of a mill and formed the primary reason for the establishment of the present city of Valley Falls.

Over the years, Grasshopper Falls suffered a number of devastating fires. No doubt, the worst was the 1913 fire that destroyed the New Century Hotel Block on Broadway. Another calamity included the invasion of grasshoppers from "Laws", Kansas, 1859. Following a number of grasshopper visitations, which started as early as 1820 and recurred in 1855, 1860, and 1861, the residents of Jefferson County became "fed up" with the name "Grasshopper", and asked the legislature to change the name of the township, river, and city. By irony of fate, the worst visitation of grasshoppers came during the summer of 1874, and mention of hoppers was not a popular subject for discussions with the residents, so with the meeting of the 1875 legislature, a bill was passed, changing the name of the town to Valley Falls and the township and river to Delaware.

Free state conventions, a downtown half burned out, grasshopper plagues, name changes, and floods are a memory. Valley Falls today is a town holding its own where "Hi Neighbor" is not just a cliche.

Enjoy walking along historic downtown Valley Falls and shopping for collectibles or treasures in the antique shops. Stop for a soda at Frank's Original Soda Fountain, or ice cream at the local Ice Cream Parlor. Please stop by the museum, and if it'

The City Park at Valley Falls is the site of the annual Softball Marathan in September when teams compete around the clock for their moment of glory. Two ball complexes keep the pace going, while there'

Built in 1857, the Reverand J. B. McAfee's little Lutheran Church was the first Lutheran Church west of the Missouri River. It 1891 it was moved to its present location from three blocks north.

The Museum is housed in a native limestone structure built in 1884 and called the McGammon Building. Both floors are open to a collection of local artifacts, including a printing press, home and farm implements, dishes, and furniture.

Frank's Pharmacy still remains as "The Corner Drugstore" since its construction in 1872 by Frank Arnold and Henry Coy.

Visitors will enjoy the "Old Time Soda Fountain", one of only a few orginal soda draws in the state.

To Valley Falls calendar of events

Things to do near Valley Falls, KS

You are invited to the five scheduled tournaments at some of the finest lakes in Kansas. The KWA welcomes anglers of a...