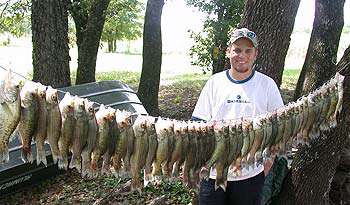 There are over 51 species of fish which inhabit Waco Lake. The 6 major species which anglers catch regularly include Largemouth Bass, White Bass, Crappie, Channel Catfish, Blue Catfish and Yellow Catfish.

The main lake shoreline has water willow that holds fish year-round, except during low water levels. The North and South Bosque rivers have abundant standing timber and laydowns.

Largemouth bass fishing is at its best in March and April. Coves protected from the north wind, and the backs of creeks, are excellent places to look for spawning bass at this time of year. White or chartreuse spinner baits and black/blue or black/chartreuse jig and pork combinations are the preferred baits. From May through September, look for bass on windy points on the main lake and flats next to river channels. Hog and Flatrock creeks are also good at this time of year. Spinnerbaits, buzzbaits, chuggers, and plastic worms are popular baits. Crappie fishing is tough to beat at Lake Waco. White crappie predominate, but black crappie are occasionally caught. In the spring, from late February through April, crappie move into water less than two feet deep. The best places to look for spawning crappie are main lake coves that provide protection nform the north wind or shallow flats next to creek channels. Keep moving to find concentrations of fish. Best catches are usually around standing timber, submerged brush, or aquatic vegetation.

Catfishing is generally best in the spring and early summer. The North and South Bosque rivers are favored spots for trotliners. Drift fishing over main lake points, submerged structure, and flats is popular among rod and reel anglers. Shrimp, blood bait, and stinkbait work well for channel catfish, but anglers after blues and flatheads have their best success with live shad, sunfish, or fresh cut bait. White bass fishing is best from February through April. Spawning runs up the rivers result in dense concentrations of fish. Good catches are also made along sandy beaches and submerged roadbeds on the main lake throughout spring and summer. Trolling or casting jigs and other small baits work well for these schooling fish. Sunfish can be caught using live worms or crickets most of the year, although late spring is best. Fish cover along the shoreline for best results, although bigger fish are usually found on submerged woody cover in deeper water.

Waco Lake has 8 parks with RV, tent and group camping facilities, some being exclusivley for camping or day use while others have a combination of both. The parks include:

Waco Lake has a total of 10 public boat ramps. The Corps of Engineers maintains 8 of these 10. The other two are operated by the two public marinas on Waco Lake:

There are over 51 species of fish which inhabit Waco Lake. The 6 major species which anglers catch regularly include Largemouth Bass, White Bass, Crappie, Channel Catfish, Blue Catfish and Yellow Catfish.

At the upper end of Lake Athens their is typically abundant vegetation above the 2495 bridge. At mid-lake their is some timb...