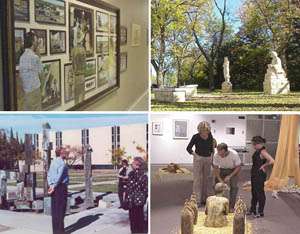 Nearly a dozen art sculptures are located on the beautiful campus of Fort Hays State University.

This self guided walking tour is a great way to enjoy the beautiful artwork on the FHSU campus. The interactive map link shows the location of the various pieces of artwork including the unique "Pieces of Our World" sculpture located in front of Tomanek Hall. The first sculpture to look for is "Interlude," located on the south side of Rarick Hall near the main entrance. "Interlude"—sculpted by FHSU artist Gary Coulter—was dedicated May 5, 1994. The work is meant to portray the strength found in all women. A grant from the Jean Stouffer Fund at FHSU paid for the molding and casting costs of the 357-pound bronze sculpture.

Across the promenade, located in front of Martin Allen Hall, you will notice "Deeply Rooted." This provocative work was sculpted by FHSU artist Linda Ganstrom and was dedicated October 2, 1999. The work was influenced by the writings of George A. Kelly, a professor of Psychology at FHSU from 1931-1943 who later taught at Ohio State University and Brandeis University. He became widely known as a personal theorist, clinician, and teacher. Sculpting and construction costs were paid for by a grant from the Jean Stouffer Fund at FHSU.

Across the street to the south of Sheridan Hall is a sculpture of native limestone by local artist Pete Felten. It was dedicated in 1997 and is called the Contemplation Garden Sculpture and features a teacher and student.

Located on the second floor of the FHSU Memorial Union is the locally famous painting by artist Bruce Burkholder titled - "History Holds the Future." Burkholder began working on this 4' by 8' oil-alkyd linen mural painting in 1986 and continued to work on it off an on for the next 23 years. It was completed on October 2, 2009, and in June 2010 it was added to the other framed pieces of art displayed in the Memorial Union.

Copy and paste this link below to view the campus map.
http://www.fhsu.edu/about/campus-map/

The road in downtown Hays City that is now known as Main Street was originally called Chestnut Street in the late 1800s and early 1900s. The word "City" was officially dropped from the name Hays City in 1885 and by 1930

This arts gallery features a variety of revolving works from several county and out-of-county artists. ...