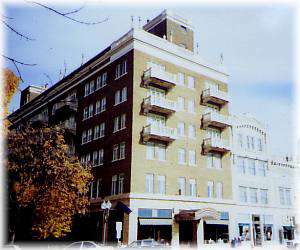 Harry P. Wareham moved with his family from Flush, Kansas in 1868, when he was two years old and when he was nine and his brother, William, was eleven, their father died. Mrs. Wareham, Sarah, established the Wareham Millinery Company, which she ran for many years.


As a teenager, H.P. Wareham built a roller skating rink at 2nd and Humboldt in 1884, and then an ice house on the west bank of the Blue River. H.P.'s ice house had the capacity for 2,000 tons of ice and he sold up to 150 rail cars of ice to the Union Pacific.


H.P. Wareham built the Wareham Hotel, the city's first phone system, first sewer system, an outdoor theater, and in 1893 took over Moore's Opera House, which later became the Wareham Theatre. William Wareham was the accountant and the "glue" which held all of H.P. Wareham's enterprises together.


The Wareham Hotel stands where the Wareham Airdome originally occupied the space between the Courthouse property and the 4 story Wareham Office Building now adjacent to the hotel. The Airdome was an open air theatre where the stage opened to the north and inclined bench seating rose northward from the stage.


The Wareham Theatre was remodeled in 1910 to replace the Wareham Opera House.


Come visit us in Manhattan, Kansas

Take a peek at the past through changing exhibits on Riley County history and in the photographs, manuscripts, letters, diaries and records of our research library. Included in the Museum Complex is the 1855 prefabricated Hartford House, the Randolph Jail, and the Goodnow House.

The pioneer museum was built in 1915 as a home and displays agricultural tool exhibits.

The Randolph Jail is a nineteenth century jail located on the grounds of the Riley County Historical Museum. It was relocated here from the old town of Randolph in northern Riley County when the old town location was moved with the creation of Tuttle Creek Reservoir.

The Marianna Kistler Beach Museum of Art offers an in-depth look at Kansas art and brings art and artists from around the world to the heart of Kansas. This 25,000 sq. ft. facility is home to KSU's permanent art collection. Since its establishment in 1928, this collection has grown to over 7,000

To Manhattan calendar of events

Things to do Historic Hotels near Manhattan, KS

This hotel, listed in the National Register of Historic Places, was built in February 1880. The red brick hotel contai...

Onaga's "new" hotel officially opened to the traveling public in 1900 and its broad front porch still welcomes visitors to On...