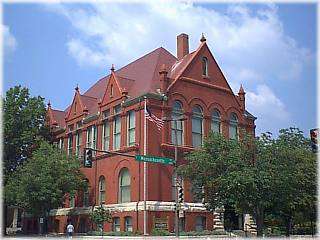 The Watkins Museum anchors the south end of downtown on Massachusetts Street. The three-story red brick building houses exhibits and artifacts of the area's history, including a display on the history of basketball. Current exhibits include "Early Settlement," which details Lawrence as an 1850's Free State fortress, and "On the Banks of the Kaw," an exhibit of Douglas County dating back 300 million years, when the area was once a shallow inland sea. Notable artifacts include a restored 1920 Milburn electric car, a 1900 surrey with a fringe top, and an 1878 two room children's playhouse.

Perhaps the most significant exhibit of the Watkins Community Museum is the building itself. Listed on the National Register of Historic Places, it is a Richardsonian Romanesque building, considered to be one of the finest examples of such a building in the State of Kansas. The wide round arches around the windows and entrances are indicative of the style. The building features ash on the first floor for the main woodwork and then oak on the second floor, and then yellow curly pine or burly pine as it's called on the top floor. The beauty of the 45 foot tall and 25 foot wide stairwell and attractive marble mosaic floors complement the wainscoting of Tennessee marble and Mexican onyx. The eye is drawn to the 25 foot long hanging chandelier with its brass, simulated jewel encrusted, glass-globed, two-part fixture.

Commissioned by Lawrence financier, Jabez Bunting ("J.B.") Watkins, the future Watkins Land Mortgage and National Bank was constructed between 1885 and 1888. It was designed by Cobb and Frost, two architects from Chicago, who also designed the Palmer Home of Chicago of the 19th century as well as the terminal of the Chicago and Northwestern Railroad.