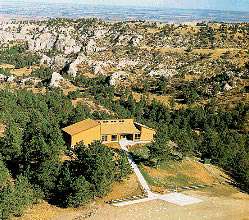 
Come visit us in , Nebraska

In October 1995 The new Wilcat Hills Nature Center was opened. The construction of the Nature Center was a colaborative effort between a group of local civic and educational leaders and the Nebraska Game and Parks Commission. The center'

Wildcat Hills Reacreation Area is primarily geared for day use and picnic outings. There is no designated camping area at Wildcat, although primitive camping is allowed on several grassed parking areas and at smaller, near-level sites along the interior trail roads. The "summit"

We currently do not have any events for , Nebraska in our database. If you know of events taking place, please add the event
.

Things to do Nature Centers near , NE