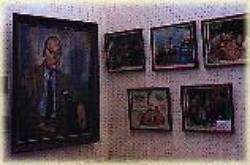 William Inge, Pulitzer Prize-winning playwright, was born and raised in Independence. Each year Independence Community College hosts a three-day festival to honor him as well as other nationally known playwrights. Past honorees include Arthur Miller and Neil Simon.

Inge�s works include the plays "Picnic" and "Bus Stop", and the Academy Award winning movie, "Splendor in the Grass". The William Inge Collection, at the college, is the most extensive exhibit of his works in existence.

Zoo residents include sun bears, buffalo, monkeys, cougars, a swan pond, caymans, eagles, and a flock of tame peacocks who roam the grounds. One of the more famous inhabitant was Miss Able, the first monkey in space. She resided at Monkey Island until her blast off in 1960. This 124

Houses a wide variety of exhibits that invite visitors to examine and experiment. Register on a computer, hear sounds on the echo tube, ride the Anti-gravity Simulator, or experience the hair-raising Van de Graaff generator. You may even want to visit with the life-like Albert Einstein.

Things to do Arts near Independence, KS

Duke Wellington Mural Scenic exploration of the history of Columbus and Kansas. Displayed in the Columbus Community Buildi...

Visit the center for the arts and the Terminal Art Gallery, both downtown, to view a variety of entertaining and interesting ...