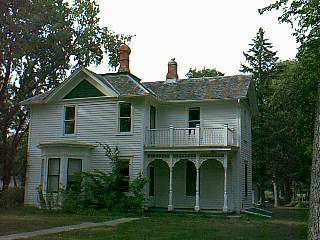 William Stolley was one of a small band of German immigrants who came to the central Platte Valley of Nebraska Territory in 1857. Stolley filed the first squatter's claim in the county. He helped organize School District 1 in Hall County and served as a director for many years. He also helped organize the State Grange and promoted tree planting.


In 1927, the Nebraska Legislature designated the farmstead as Stolley State Park. The homestead includes the William Stolley house, a one-and-one-half-story log dwelling constructed in 1858-59; the oldest remaining schoolhouse in Grand Island, this frame school building was erected in 1869-70; and a reconstructed log house. The property also includes the site of Fort Independence, a fortification erected by citizens during the Indian war of 1864.