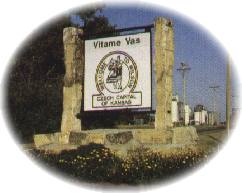 From the Butterfield Overland Express of 1865 and the Wilson station of the Union Pacific Railroad in 1868, to the "Czech's" Bohemians of 1874, this town has gone by three different names. At first it was known as Attica, then Bosland, then was named "Wilson" by the U.S. Post Office in 1874.

Wilson is known as the Czech Capital of Kansas because of the heritage that settled here. Occasionally one can meet citizens of Wilson who still know the native tongue.

The Czech's are known for their hard work; which is represented in the quarried post-rock one finds in the buildings and fence posts. Today twenty-two of those buildings are still standing and many house businesses nearly 100 years later.

Wilson is the Gateway to beautiful Lake Wilson, which is a man-made lake of 9,000 acres of clear blue water. One can enjoy fishing, boating, camping, nature walks, and swimming.

You are also in "Post Rock Country" where tours are available for around town, in the country and through the shops. (By appointment, please.)

Things to do near Wilson, KS

Higley Cabin - "Home on the Range"