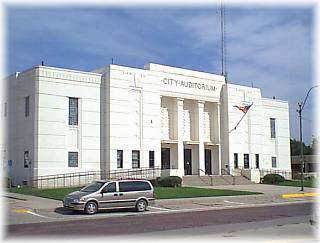 The completion of the Yorkshire Playhouse in
downtown York was a milestone for the
community and the many volunteers and donors
who turned a historical building into a respected,
attractive community building. Complete with high
ceilings, chandeliers, posh carpet and wall
treatments - the feeling of ritzy, yet homey
surroundings make visitors feel comfortable and
pampered. Comfortable seats face a large,
portable stage which is lit by state-of-the-art
equipment.


The theatrical group started nearly 30 years ago,
when drama enthusiasts got together to create community theater. Today, the product of their efforts has
become one of the most respected community theaters in terms of consistent quality drams, comedy and
music.

The playhouse has also been used as an art and photography gallery for the annual show during
Yorkfest, and the American Heart Association located its annual wine tasting fundraiser in this ritzy
setting.

Things to do Arts near York, NE