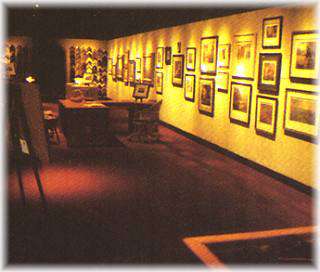 Visit the Gallery and Museum that
people are talking about. Mentioned
in five national magazine articles and
nominated for two outstanding
awards in Nebraska.

Nationally known,Gene Roncka, artist and owner of Willow Point Gallery in Ashland, Nebraska has described his works as "capturing a moment in time that all of us have experienced, either in fact or fiction." Soft muted color and the ethereal quality of his works seem to epitomize what is best in his richly painted canvasses. He paints more than most see, including the very "feelings" which bring emotion to his paintings.

View
Roncka's originals depicting the
history of Nebraska and the important
role the Ashland area played in the
development of the West. The large
oil painting, "The Crossing" depicting
the pioneer's migration of Salt Creek
is exquisitely portrayed by Gene
Roncka and can be seen on exhibit
in the gallery. Also, part of this
historic collection is the 4x5 foot
painting of "Ietan, Oto Chief" who
ruled over the majestic Platte Valley
some two hundred years ago.

See the exquisite display designed
and executed by Gene Roncka
featuring Archie Hightshoe's
outstanding group of wildlife animals,
including one of the largest polar
bears ever taken from the Arctic
Circle.

In 1985 Gene and his brother Richard formed their own art publishing company, Willow Point Limited, which has established a network of art galleries nationwide. Gene has brought a gallery to Ashland near his home at Willow Point Lake and is at home with the Bear collection, having artfully designed its natural setting. He was elected for the first State Nebraska Habitat Stamp Competition. He was commissioned for animal paintings for the documentary "Wild Kingdom," was a finalist for National Ducks Unlimited Artist of the Year, Best of Show Kansas and Oklahoma Ducks Unlimited.

Landscapes, wildlife and nostalgia are his favorites, as is evident upon entering the new and distinctive Willow Point Gallery.

Stop by and enjoy a cup of coffee as you stroll through a wonderland of excitement.

Things to do Arts near Ashland, NE