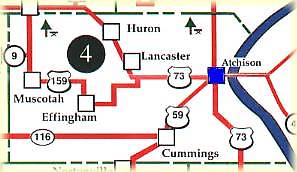 On July 4, 1804, the Lewis and Clark expedition passed through the area which is now Atchsion County. Two local streams emptied into the "big" river and in honor of the day, they named them, "Fourth of July 1804 Creek" and Independence Creek. These names kept their history alive even though it wasn't until 50 years later when the Kansas Territory was opened for settlement, that 18 men crossed the river to organize and plot the town of Atchison.

Learn more of Atchison County by visiting its unique cities described below.

Established in 1868, this town was platted along the Central Branch Railroad. Effingham was also an important livestock shipping center and trading point. In 1915 there were 22 businesses and 5 churches. The town first received electricity in 1914 from Atchison.

Established 1882. The town site was originally the property of Colonel D.R. Anthony. Huron was relocated to a new site along the railroad. Many fires destroyed the town depleting the population. The town is either named after the Huron Indians or an Ohio County.

Established 1858. The old Military Road passed through this little town. A good trading point and livestock shipping center, this prosperous community at one time supported 15 public buildings and many families.

The original name was Cummingsville and was established in 1872. The town was platted by William Cummings to set along the Atchison, Topeka and Santa Fe Railroad. In the 1920's there were sixteen businesses and three churches.

This is a community straddling the Atchison-Jackson County line. This town was platted as a station on the Leavenworth, Kansas and Western Railroad which pushed through the county in 1871 and served this part of the state until 1935.

Established 1884. Popular mineral springs attracted people who were hoping to find a fountain of youth. The town grew fast because of health resorts. Most of the town was destroyed by fire and never rebuilt. The springs are now farm land.

This town was established in 1883 as a station on the Santa Fe and Missouri railroads. Named in honor of James Parnell, who was a Civil War hero, one of the first from Atchison County to respond to Lincoln's call. He died in battle Hoare Head, A.R.

Established 1857. The name is of Indian origin and signifies "Beautiful Prairie" or "Prairie on Fire." The townsite of the present Muscotah was originally part of the Kickapoo Indian lands and was granted by a U.S. patent to Chief Pe-it-e-quark.

The town of Kennekuk was founded as a stage stop in 1858 and named after Kickapoo Indian Chief, John Kennekuk. One of the earliest settlements in Atchison County and the headquarters for the Kickapoo Agency, it served at least three trails in the 1850's and 1860's; an overland freighting and stagecoach road from Atchison; a stage coach and Pony Express road from Fort Leavenworth to Fort Riley.

Aviatrix Amelia Earhart was born in this home, built by her grandfather, Judge Alfred G. Otis, in the early 1860s. It it owned and operated as a museum by the Ninety-Nines, Inc., an international organization of women pilots. Earhart helped found the group in 1929

A historic marker erected by the Kansas State Historical Society that commemorates the site where, during the years between 1855 and 1857, some 20,000 Mormons camped before moving on to their "promised land".

On the Missouri river, the park offers camping, picnics, and fishing.

This charming limestone building was completed in 1868 according to plans of Richard Upjohn, who also designed Trinity Church on New York's Wall Street. The interior has beams and pews of native black walnut and lovely stained-glass windows. Listed on the National Register of Historic Places

Theatre Atchison is a community theatre that annually presents four plays and a summer musical in the intimate setting of a renovated, historic church sanctuary. The theatre's capacity of 220 surrounds a thrust stage. Mystery dinners are offered 3-4

Learn about Atchison from those who know it best. Hop aboard the trolley at the Santa Fe Depot and enjoy a 45-minute tour of Atchison narrated by your friendly, knowledgeable driver. As the trolley moves along the city's brick streets, you'll discover the classic charm of Atchison, including 18

Adjacent to the Santa Fe Depot, the Atchison Rail Museum is owned and operated by the Northeast Kansas Railroaders, Inc. It features an outdoor collection of rail cars including a Baldwin locomotive, several passenger cars and cabooses, and a snow plow.

Atchison's newest memorial to its favorite native daughter is the one-acre Amelia Earhart Earthwork created by famed Kansas artist Stan Herd. This living portrait of Earhart lies on the berm of a hill overlooking Warnock Lake. It was created to celebrate Earhart's 100th birthday on July 24, 1997.

Despite a few privileged years living with her grandparents in Atchison, Kansas, Amelia Earhart's childhood years were fairly transitional. Her father's job took him to Des Moines, where the family joined him a few years later. In 1913

The latest movies are shown on two screens at this historic theatre, which has been completely renovated.

Parquet floors, stained-glass windows, hand-tooled leather and finely-carved woodwork set an impressive surrounding for the works of regional artists that change each month. Listed in the National Register of Historic Places